Why is serious gaming fun?

Serious games help to motivate learning and to realize behavioural change. Games are generally played for entertainment. In serious games, the learning objective is key, but the game has to be fun.

The degree of fun in serious games is mainly reflected in game design. A serious game has to fit the target group and it has to translate the project objective into good game design. In addition, the right game mechanics are important to make the game exciting and to guide the player through the game with ease.

We asked our game designers how this works. 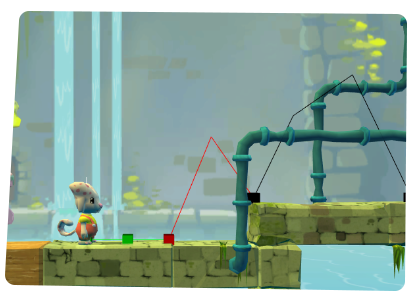 Firstly, it is important to understand what the development of a serious game looks like. When making a serious game, we look at three parts:

These three parts must fit together seamlessly.

What makes a serious game fun?

To make a serious game fun and entertaining it has to be:

To realize this, there is quite a lot involved. Let’s take a closer look at these points.

A serious game tailored to the target group

Everything starts with an objective. Think about transferring knowledge or realizing a behavioural change. Such a ‘project objective’ often contains information about the problem, the solution and the target group.

An example of a project objective can be: “Activate professionals in the financial sector to work on their health every day”.

In this case the target group is highly educated. The game may therefore contain more complex texts. For convenience, a mobile game can be chosen, because the target group always has a mobile on hand that works on the common company networks. All these factors ensure that a game is readily accessible.

Based on the project objective and design choices, game characters have to be invented. A fascinating and motivating character. That is quite a challenge. Especially to make it fit the target group. Often certain characteristics of the target group are taken into account. Take as an example a serious game for surgeons. It is generally known that surgeons are motivated to help people. This is an element that can come back in the serious game. Also, surgeons may like to be the boss in an operating room and value status. In the serious game they don’t necessarily have to play as a surgeon, but it has to be a game character that fits the characteristics of the target group. For example, it is possible that a serious game is developed in which the surgeon plays the role of a pilot, the boss in a cockpit.

A surgeon as a bomb expert: the storyline and game world

The storyline and the game world of a serious game must also fit the environment. Back to a game for surgeons who need to learn how to operate. You can think of a serious game where the surgeon is on a smartphone or console in an operating room and has to cut in the right places. This is quite exciting, but it can be more exciting! To keep the user motivated and increase the fun factor, a similar setting can be created. What if the surgeon moves into the game as a bomb expert? They start at level 1 and see a time bomb, where they have to cut the right threads in 5 minutes. There are 5 red threads. By watching how the threads run, a decision can be made which threads need to be cut first. Has the wrong wire been cut? Boom! This is just an example of how the content and setting is transformed into a suitable game, where design, story and characters fit the environment, but exitingly. The context is a very important part of the game.

Besides the narrative (the storyline, game world, and characters) other factors also play a role. There are numerous factors that can be implemented in a specific game. The list is endless. Think of ‘pacing‘ or ‘flow‘. This is a game principle where the duration and intensity in a game are determined. A game should feel like a ‘ride on the roller coaster’: sometimes calm and sometimes full power ahead.

Another example of a game principle is ‘making interesting choices‘. In games it is important that a choice is meaningful and leads to a certain turn in the story. A game becomes more fun when the user can determine how the game goes. In case of a wrong choice, it may of course be that the level has to be replayed, and that is where one learns from certain choices. Rewards in the game help to motivate the player to consistently make the right choice.

As you can see, the number of factors in the design of a serious game is endless. They also depend very much on the objective, target group and type of assignment.

Game mechanics can be seen as a kind of ‘rules of the game’. They guide the player through the game and make sure they don’t get stuck in a game. There are different kinds of design disciplines that make a serious game more fun.

A design discipline that improves the game experience is ‘game feel‘. This means that events in a game become more fun or realistic, or feel better, and therefore more exciting to perform. Game feel is often used in shooters (shooting games), where the player shoots a car and then causes an explosion. When the explosion occurs, the screen may start to vibrate and the controller vibrates from the recoil of a weapon. Game feel’ ensures satisfaction to perform an action.

Challenge and reward ensure progress and feedback. A good game has a progression system that motivates the player to continue playing. Often this is linked to a skill level. When the user is unable to meet a challenge after multiple attempts or when the challenges are too easy, he or she becomes less motivated. By placing the player at a certain skill level it is more rewarding to complete the challenge.

Rewards are important to keep the player involved. Rewards give the user a sense of euphoria. Balancing reward is important. Balancing’ indicates how often and how big a reward should be. Imagine you get a compliment for your work every Monday morning at 10.00 am. The first time this gives you a very good feeling, but after a few weeks the value of the compliment will decrease. Often in games, the interval of rewards increases as the game progresses, so the challenge increases. Another principle is that rewards are given at random intervals, after level 1, then after reaching level 4, then again after level 5, then 8 and so on.

The same principle occurs in the balance between the challenge and the reward. If a player presses the start button in a game and then gets a big message with “congratulations, you’ve pressed the start button and completed the first challenge!”, the player probably thinks: “what is this?” The player then doesn’t feel like he has done anything important. A reward should follow when a big decision has been made with a happy ending or when the player has made a big effort.

‘A game is as good as its weakest parts’

A serious game can be designed meticulously, but if an important part of the game doesn’t work, the fun and motivation of the player can disappear in seconds. The User Interface (UI) must therefore be completely correct. The buttons, menus, and other signals should lead the user effortlessly to and through the game. Think of simple, crucial parts like a ‘play icon’ on the start button in the game and of course the word ‘start’ on that button.

Another example is a moment in a game where the player has to click on another character to start a conversation with this character, to get further in the game. For instance, most youngsters who regularly play games understand that they have to click on a character, and have a conversation when there is a large, red exclamation mark above this character. However, certain target groups may find that just an exclamation mark is not enough to understand that they have to click on it. That is why game mechanics are always tested with the target group during the development process. Do they understand the menus, texts and the steps that need to be taken in the game?

As you have noticed there are numerous factors that contribute to the fun factor in a serious game. In this article, only a few factors are discussed. Which game mechanics should be used and what the game world, characters and the game story should look like strongly depends on the objective and target group. All these elements contribute to the entertainment value of a game and need to be analysed and tested in every step of the process.

Would you like to know more about serious games and how they can help solve your problem? Please contact Tim Laning to discuss it:

Game based learning for MedTech