Serious gaming is an increasingly popular topic. The first examples of serious games were used in the 18th century. In Germany, the traditional chess game was transformed into ‘Das Kriegsspiel‘. Chess pieces were replaced by military vehicles and soldiers and the squares were coloured to indicate different terrains. The game was used to train soldiers and the army used it for research purposes.

The game was unsuccessful. There was a lot of criticism: soldiers did not believe in it. But, it was the start of the game revolution, serious games, to be precise. Games with a purpose to transfer knowledge and/or change behaviour.

Today serious games are successfully used in various ways. What makes a serious game so good? What problem does it solve and what are the results? In this article, we explore five successful examples of serious games. 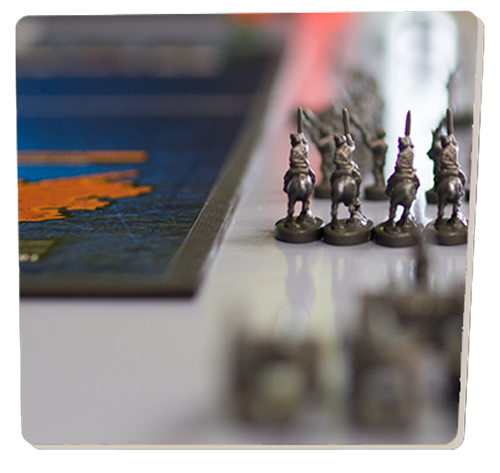 Practice makes perfect. However, in some professions practising sharpening skills does not come naturally. We observe this in surgical training. First, it is impossible to have a ‘real-life’ training session, because of potential fatalities. Secondly, the traditional surgical-training method use simulators that are extremely expensive. A surgeon in training has to practice 200 hours a year to improve skills.

The University Medical Center Groningen (UMCG) noticed two things while observing trainee surgeons: the expensive simulators were not used a lot, because they were not engaging and fun. On the other hand: the surgeons enjoyed playing games on their smartphones during their breaks, such as ‘Angry Birds’. What if the simulator is transformed into an experience as exciting as Angry Birds?

Objective: to make training for surgeons as fun as ‘Angry Birds’

The UMCG and Grendel Games developed the game ‘Underground‘. In an exciting world, the surgeons play ‘Sari’, a brave girl who has to free her robot friend ‘Sw4nk’ from the mines. With a customized laparoscopic controller, the surgeons must complete challenges that will train their psycho-motor skills.

The results of Underground

The implementation of Underground brings many advantages for both UMCG and the trainee surgeons:

The serious game ‘Underground’ has won the Dutch Game Award twice and has been proclaimed by Forbes as a ‘game that can change the world’. Discover more! 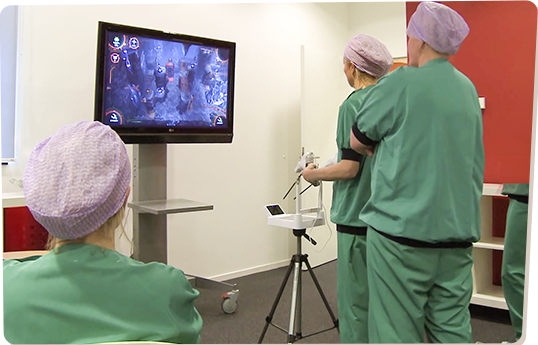 At first glance, ‘Sea Hero Quest’ seems to be one of many games on your smartphone. But the game has a more important function than just entertainment. Two companies, the ‘Deutsche Telekom Alzheimer’s Research UK’ and game developer ‘Glitchers’, were looking for a way to collect more data for their dementia research.

While you sail through twisty canals in a boat on your way to the next checkpoint, the game is watching you. Sea Hero Quest’s clever technique values your navigation skills: the first affected skill in dementia.

The data is used to better understand what the ‘standard navigational skills’ are. So finding a zero point. From the zero point, researchers can see when someone’s navigation skills become less than average, which can be a consequence of dementia.

Dive into the world of Sea Hero Quest:

The results of Sea Hero Quest

After over 2.7 million downloads in 2017, a virtual reality edition was released. Why was it released? To add more experience and entertainment. This increases usage. More users mean more data and that will help gain more insight into dementia.

Initial findings showed that spatial navigation skills start to decline as early as the age of 19 in dementia patients?. A fundamental difference has also been found in navigation strategies between men and women. Men performed better than women.

3. Ludwig: a journey into the world of renewable energy

In order to win this game, children need to acquire applicable knowledge about sustainable energy. The company Ovos from Austria was looking for a way to offer physics playfully. Together with specialists, teachers and pupils ‘Ludwig‘ was developed.

In this serious game, children (10 years and older) control the little robot ‘Ludwig’ through the four different worlds of energy (from combustion, water, sun and wind). In each world, the children collect rewards that are in line with the curriculum of the profession. Have all the rewards been collected? Then the knowledge book and the physics course have been completed.

Objective: research on how serious gaming motivates to learn

Ludwig is a project that investigates whether a serious game motivates children aged 10 to 14 to learn. The three pillars of the research are:

The results of Ludwig

The results of the research show that children become motivated to play the game because of the freedom of movement in the open world, the attractive characters and the intriguing storyline. Pupils also feel more attracted to the game because they have to make an effort. However, they do find it important that the game is not too difficult. In serious games, therefore, different levels of difficulty are often applied.

4. EndeavorRX: a video game as a treatment for ADHD

When you think of medicine, you probably think of medicine in the form of a pill. However, the American company ‘Akili’ has proven that a serious game can also be a medicine. They developed a game as a treatment for children with ADHD: EndeavorRX.

The game idea was scientifically researched for six years. As many as 600 children from 8 to 12 years old participated in the test. Currently, EndeavorRX can officially be prescribed according to the U.S. Food & Drug Administration as a treatment for ADHD. This is the first of its kind. Until now, a game has never been an approved treatment for a medical condition.

In the game, children send a flying craft through obstacle courses, where they have to avoid obstacles while collecting rewards. A child’s brain is challenged to focus on multiple tasks at once.

The research results show that playing EndeavorRX improved attention and concentration in a third of the participating ADHD children. As many as half of the parents saw a positive change in their child.

We have a very advanced system in our body that experiences pain. When you touch a hot pan, you feel pain and immediately withdraw your hand. Your body gives this signal (pain) to indicate danger and limit possible damage. Unfortunately, this system does not work for everyone. As in patients with chronic pain.

Reducept, winner of the World Summit Award in the category ‘Health & Well Being’, helps patients deal with chronic pain. The game also makes patients aware of where the pain comes from. Discover how:

Virtual reality is a success factor in the game. Scientific knowledge about virtual reality, pain education, and psychology shows that you can teach your brain to gain more control and reduce pain in the long term. Read all the results here.

Serious games were first used to train soldiers in the 18th century. It was not a success. In the past 200 years, research and technology have made serious games successful. Today, the possibilities are endless and the impact is enormous.

When we develop a serious game we try to combine the best of both worlds: the power of research and our expertise in game development. This combination gives us the opportunity to make a game effective and fun. In other words: serious entertaining! Read here how we do it.

Want to know more about serious games and how we can help you? Please contact Tim Laning for a discussion:

Scientific publications of our serious games

What knowledge is needed to develop a serious game?