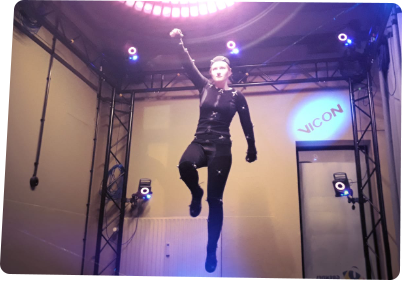 What can you do with motion capture?

Motion capture is commonly used in the film, animation and game industries. The technique is useful for animating:

Reputable game, film and animation studios have their own motion capture studio and have all the expertise to make their own recordings. In addition, they have a large network of actors at their disposal, enabling them to produce animations in real-time. For large studios, it is therefore So motion capture is definitely interesting in large studios.

How much time does motion capture take?

Which is faster: motion capture or manual animation? Whatever animation technique you use, time investment makes no difference. In terms of organization and intensity, motion capture requires more attention. You need a team with an actor, operator, and director. Ideally, you should also gather people from other roles to watch what?. Animating yourself (with the classic method) can be done with one animator and sometimes an art director, and is, therefore, a lot less complicated organizationally.

Furthermore, the director will have to prepare a script and a schedule to ensure that the motion capture shots run smoothly. Objects (such as a fake sword or gun) may be needed for the filming, and several actors may need to be shot simultaneously. After the motion capture recordings, the data must be processed and exported. From that point on, the process takes as much time as that of a “normal” animation.

Can you merge or edit motion capture recordings?

For example: you want to merge a crawling and running animation so that with two recordings, you have three different animations: ‘running’, ‘crawling’ and ‘crawling running’. If you then make another recording of ‘looking around’, with 3 animations, you can already make 6 different variations. In principle this is possible, and it saves a lot of time, but sometimes it can give a strange and unnatural result if the start and finishing positions do not match. Then it is better to re-record the ‘crawling run’ animation.

Editing motion capture footage is also tricky. The power of motion capture is precisely that it is realistic. Any editing afterwards means that you remove a piece of realism. There is a lot of subtlety and small nuances in the different movements. Therefore, it is better to make a separate recording for each animation.

The data is editable after recording. In fact, this is often necessary, for example, to remove digital noise that makes certain movements jerky. However, it is still important to set up the recordings so that editing afterwards is minimal.

What about reusing motion capture recordings?

Especially in games, some movements occur a lot. Walking, jumping, crawling: these are common movements that you do not necessarily need to record over and over again. Even better: There are databases with standard motions recorded with motion capture. You can use these to save time.

However, it is wise to check carefully whether the animations fit. This depends on the purpose of the animation. Suppose you want the actor’s loop animation to be clumsy, it is better to record it yourself. After all, the power of motion capture is to capture the subtle nuances.

Getting started with motion capture

In this article, you’ve read about when you can use motion capture, how to use it and what to look out for. Motion capture is a powerful technique for creating hyper-realistic animations. Relative to animating yourself, it is an intensive process to organize, and the costs can be relatively high in the beginning. It is, therefore, useful to consider whether this will be beneficial in the longer term.

Grendel Games has a professional motion capture studio in Leeuwarden to record game animations. Are you curious how a motion capture recording works and what is involved? We would like to tell you more in this article.

Want to know more about motion capture, need help with your recordings, or want to hire our motion capture studio? Please feel free to contact Tim Laning to discuss it: