Previous research works have looked into the effectiveness of serious games and the results have been positive. Nevertheless, going for such a relatively ‘new’ technology remains an exciting step. . Before you actually opt for a serious game and start developing it, it is important to make two considerations: 1. what is the question, the problem or the idea about? and 2. what conditions does the solution have to meet to be effective? 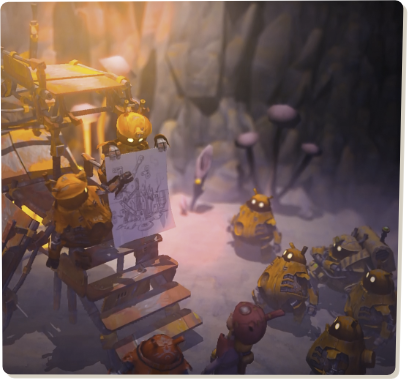 Serious games are games with a purpose other than pure entertainment. Despite the fact that the serious game has to be entertaining to hold the player’s attention, conveying a message is at the heart of the game. Serious games are used to, among other things:

Before actually choosing a serious game and starting development, it is important to first answer two questions:

What is your question, problem or idea?

Of course, serious games are great fun to use as a tool. But its added value is even more important.. In addition,, you also want the game to fit in seamlessly with what you want to achieve. That is why it is important to start with the next question:

This is the first step we take when we receive an application for a serious game project. It often concerns a problem that is difficult to solve through traditional means. Usually, a serious game is a cheaper alternative with better results. For instance, replacing an expensive simulator for a serious game.

Based on a problem or idea, the objective is set. We try to make it as specific, measurable, time-bound, achievable, and relevant as possible. Subsequently, research is done with the stakeholders in the project, for example, the domain experts and the customer. This research is also known as the ‘requirements analysis’. Here, we describe the problem that the serious game will solve.

An example of an objective could be: “To allow surgeons to practice doing laparoscopic surgical procedures 25% longer within 6 months after the launch of the serious game”. The duration percentage and number of months makes the objective measurable and will be based on the study.

What are the conditions for the serious game?

Drawing up conditions for the serious game is also very practical because it provides insight into how the game is used and the target group to be reached. If this is not yet clear, it will be made concrete at this stage. Questions that can be asked are:

Finally, of course, you also want to know how long it takes to develop a serious game. Then take a look at this article in which we provide detailed answers to that question.

Would you like to know more about serious games or do you have a challenge for which serious gaming might be the solution? Please contact Tim Laning for a talk:

“Games may be effective for surgical training”