How to prove that serious games work

In this article, we will take a close look at how serious games are effectively validated, specifically in the environmental sustainability and healthcare industries.

There are still those who question the effectiveness and efficiency of serious games as a tool for training, education, and awareness creation. These doubts are usually borne out of the inaccessibility and in other cases the unavailability of evidence that proves serious games’ effectiveness.

By the end of this submission, we want to establish as a matter of fact that serious gaming can be validated scientifically, accessing cases from the health and sustainability sectors.

There are two ideas we need to define before we can proceed to the meat of the matter. These definitions will help put us on the same page.

So the question is, how does serious gaming fit into the world of science? Here is how:

We will demonstrate why serious games can be scientifically validated with two examples from our projects.

Problem to be solved

Water, as globally recognized, is key to man’s existence. The world in recent times has been reminded of this reality through global warming and climate change. Different countries are faced with different water challenges, including water supply deficits.

The question to answer then was, “Can serious gaming be a solution to water conservation?” The collaboration aimed to reduce water usage during peak hours.

The hypothesis was that, if serious gaming can be used to teach then it could also be used to enlighten households on water conservation and eventually teach people to save water.

Vitens and Grendel Games decided to create an application, Water Battle, with three elements. The product is a game for children from ages 6 to 11, it also comes with educational materials on water conservation, and finally, households can also track their water usage.

Vitens and Grendel Games figured that the best way to change water consumption behaviour was through the collaborative efforts of household members, that is, children and parents/guardians. So, this is how the product worked: 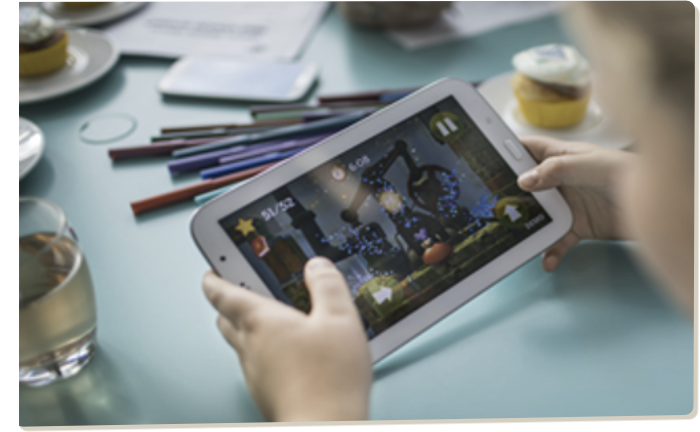 These options mean we could have households that used the product compared with those that do not for comparison or just a single group of households and a comparison of their performance before and after product use.

Vitens and Grendel Games adopted the within-group approach. They recruited over 300 households and monitored their water usage during peak hours for 3 months as they used the product, Water Battle.

The ratio between the peaks and valleys in water usage significantly improved. Before the start of the campaign, this ratio was 1.87. In other words, during peak hours, water usage was 1.87 times higher than the rest of the day.

Since the UK is also unfortunately faced with a dire water situation, Water Battle will be fully deployed there in the coming years. The ultimate goal would be to change water consumption behavior through serious gaming.

Problem to be solved

In surgeries such as laparoscopy, trainees traditionally use simulation trainers for skills acquisition. This methodology comes with a drawback. Trainees are less motivated to continue with systematic follow-up sessions once training goals are reached. The reason is that simulators are considered uninspiring and boring.

Can serious gaming as a tool help motivate the trainees to continue systematic follow-up training?

The hypothesis is, if games are generally entertaining and engaging, then serious gaming is an effective motivation tool for trainees.

The University of Groningen Medical Center (UMCG: the Netherlands) and Grendel Games develop a product called Underground. The game is played on a Nintendo Wii-U. In the game’s cave scenery and setup, players use tailor-made controllers to build roads and create paths. The game has no medical or anatomic element to it but is meant to train the pycho-motor skills of laparoscopy trainees.

At the Radbound University Medical Center, a study was conducted by Ijgosse and colleagues (2018), with 107 participants, divided into a control group and an Underground training group. The control group had four training sessions on a simulator while the Underground group played Underground for three sessions and transferred to the simulator on the fourth session. This transfer was to test the engaging effect of Underground.

Underground admittedly has a huge potential. The conclusions from the studies conducted so far suggest there a few additions that could heighten engagement elements amongst trainee surgeons. For instance, there have been suggestions to include a scoring and ranking system.

The inclusion is expected to feed the competitive nature of the target audience.

These suggestions can only make the product better and help sharpen the skills of trainee surgeons for societal benefit. This is exactly what serious gaming strives to achieve.

We have illustrated the scientific approach to serious games validation, with 2 briefly described case studies.  So, you are completely right if you ever thought serious gaming is a viable solution for societal problems. And YES, the solution can be scientifically validated.

Ongoing discussions should be in the lines of, how validation techniques in serious gaming can be improved and creative ways the solution can be adapted to solve societal problems.

If you already have some ideas or questions, let’s continue the conversation, contact Tim Laning via email / tel: +31681565635 / Linkedin

The effects of serious games on laparoscopic simulator skills

What is expected from me during serious game development?