There are so many possibilities with serious games! A serious game can change lives on a global level. In one of our recent articles, five game-changing examples of serious games, we shared some ideas of successful serious games. In the current piece we show the positive effects of four other serious games. Serious games are generally used to transfer knowledge or achieve a change in behaviour. The advantage of a serious game is that they have a high entertainment value. Dull activities can then suddenly become fun, resulting in longer exposure to the activity. In the present article, we assess the positive effects of four serious games; Nintendo Ring Fit Adventure, Gryphon Rider, Assassin’s Creed Discovery Tour and DragonBox.

Nintendo Ring Fit Adventure: defeat a muscular dragon by working out in your living room.

Keeping up with a good fitness routine can be quite difficult. Sometimes we just don’t feel like exercising, or cycling to the gym when it rains. In 2019 Nintendo announced a new gaming experience as part of the Nintendo Switch game console: Ring Fit Adventure. It is a ring-shaped device with a separate strap attached to the leg. But those are just the accessories.

Ring Fit Adventure is a game in which you have to jog, run and do other fitness exercises while doing a virtual obstacle course. The ultimate goal is to defeat the devilish, muscular dragon ‘Dragaux’ who wants to destroy the world. By doing exercises and using the ring, which acts as a weapon in battle, you try to stop the dragon.

The exciting storyline makes you forget that you are doing exercises. Admit it: fighting a dragon is a lot more fun than an hour at the gym, isn’t it? As you complete several levels in the game, you get tips on how to do exercises better. These tips will get you prepared to defeat the dragon. The combination of exercises and tips from a virtual fitness coach also makes the game unique.

Along the way, you encounter and fight several enemies. After each victory, you’ll receive more XP (Experience Points) to improve your ranking. With new ranks, you also unlock new movements. The more the game progresses, the more fitness exercises you learn and perform. With 20 game worlds and more than 100 levels, you can move sufficiently every day. The positive effects of this serious game are; you move more often and longer, learn new exercises and perform the exercises better.

Rehabilitation is a difficult process in which many repetitive exercises required. This can be quite boring and tiring, especially for children. That is why Gryphon Rider was developed. The game has been developed for children with acquired brain damage.

In traditional rehabilitation therapies, children engage in balance exercises. These are generally boring exercises, However, in Gryphon Rider, the child sits on the back of a gryphon and leans to the left or right to move the gryphon and keep their balance. In the course of the game, the movements and balancing become more and more difficult.

The game can be played in a rehabilitation centre under professional supervision, but also at home with friends. Because it is accessible and fun to play, children remain motivated to practice for a long period of time.

Gryphon Rider is played on a game computer or console with a ‘Kinect’: a camera that detects the movements of the player. For a fluid rehabilitation process, these data are automatically processed into clear graphs and sent to the supervisor for analysis and feedback. The positive effects of this serious game are: (i) by playing the game, children enjoy their therapy session and this results in longer practice hours. Moreover, (ii)results are automatically tracked and displayed in graphs.

Assassin’s Creed: discover the history of Egypt from your computer

We are more engaged when learning is fun. A journey through the pyramids of Ancient Egypt therefore sounds great! Game developer, Ubisoft, thought the same and launched ‘Assassin’s Creed Origin Discovery Tour – Ancient Egypt’. In this tour, you dive into the history of Egypt yourself and discover the ancient pyramids, learn more about the geography and nature of Ancient Egypt and experience what everyday life back then. You also get the opportunity to travel on camels between cities and swim in the River Nile.

The Discovery Tour is built as an open-world game. This means that the player can move freely through a large game world and also freely decide where to go. It really feels like going back in time as an Egyptian resident. If the player wants a bit more support?, a guide can be called in to give the player a tour through Ancient Egypt.

The game is designed for students and teachers to use in history lessons, but can also be played by gamers who simply want to play a fun game while learning more about the history of Egypt in a relaxed environment. Not everyone likes to learn history. So, Assassin’s Creed Discovery Tour offers a great alternative medium for knowledge transfer. This is the positive effect of the game. In the meantime, it has been so successful that a new variant of the game has been created in which the player delves into the history of Ancient Greece.

DragonBox: learn maths with a boardgame

You may have heard of the game called Kahoot. The game involves a live quiz played on smartphones. That is not the only thing Kahoot offers. The maths app DragonBox is also part of the e-learning platform. The DragonBox board is divided into two halves and the goal is to isolate a box (containing a baby dragon) on one half of the board. In other words, the box containing the baby dragon must be placed on one half of the board by itself. This isolation is done by moving monsters and dice from one side to the other. The sums become more and more complicated as you progress through the game, and before you know it you are mastering algebra: 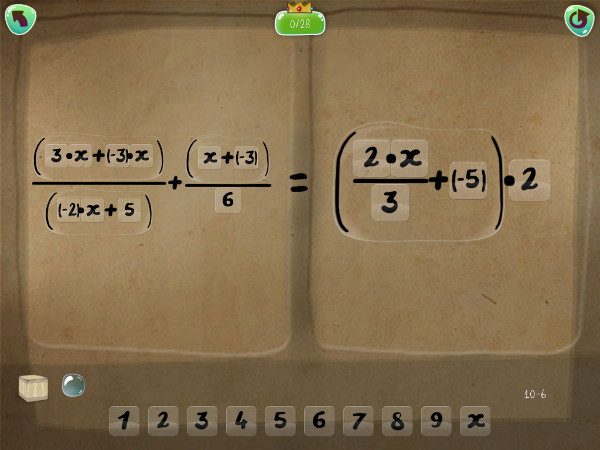 There are three variations of the game for different age groups starting from 5-year-olds. By practising mathematics at such a young age, the child is more likely to have less difficulty with the subject. We notice the difference in primary and secondary schools. , This is an innovative solution that allows children to practice mathematics for a long time and with a lot of fun. These are the positive effects of this serious game.

Tip: also read this article with five other examples of successful serious games!

Would you like to know more about serious games or do you have a challenge for which serious gaming might be the solution? Please contact Tim Laning for a talk:

Difference between simulations and serious games for surgical training

How long does it take to develop a serious game?

Serious game development: what does it take to make it succeed?