Difference between simulations and serious games for surgical training

A banana, pig carcass, simulator or video game: these are four tools that surgeons can use to practice operations or improve motor skills. Nowadays we see that the banana and the pig are more often replaced by simulation or games. This is cheaper in the long run, and above all, more efficient. But, what is the difference between simulations and serious games for surgical training and which one should you choose? 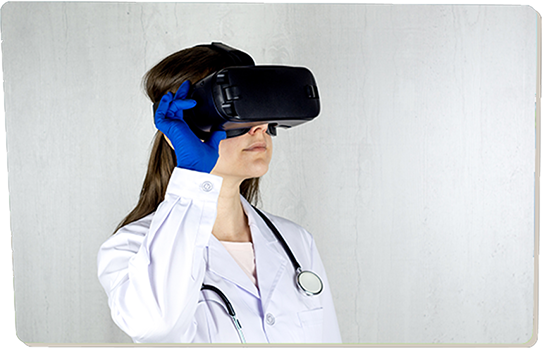 It is not for nothing that various forms of simulations and serious games are making inroads as a training tool for surgeons. Surgical students need to gain a lot of experience during their training. And when they finally get their degree, they still have to put in a lot of practice hours to keep their skills up to date. With multiple surgeons in a hospital, a simulation or serious game is much more interesting financially and practically than, say, practising on cadavers.

A simulation is an imitation of reality. This can be on a 2D screen, but increasingly 3D simulations are used with Virtual Reality optionality. Simulations are cheaper than practising with cadavers.  It also means a reduced number of employees is needed to train surgeons.

One advantage of simulations is that they are close to reality. Surgeons can practice in a safe environment where they are allowed to make mistakes. Ultimately, this will reduce the number of errors made during real surgery. Even with traditional practice methods such as a cadaver, it’s not a bad thing to make mistakes, yet at some point, you have to have a new cadaver. In this scenario, just clicking ‘start again’ in a simulation is definitely easier and cheaper.

An example of a simulation for surgical training is Touch Surgery. In this app, you can specify what your speciality is and whether you are an experienced or student surgeon. For example, if you have chosen throat surgery, you will be given several lessons about throat surgery. You’ll find out what the inside of the throat looks like and what actions you need to take to make the procedure successful. By answering questions and performing surgical manoeuvres with your finger, you earn points. It is an effective way to give surgeons in training a realistic view of surgical procedures.

Like traditional practice methods, simulations have some drawbacks. A complete, effective simulation experience requires a good simulator (a device on which you play the simulation). That, in turn, is more complicated than just an app like Touch Surgery. Especially if it is a 3D or Virtual Reality simulation. First, this equipment is expensive to buy. Second, the simulator can then only be played in a fixed location. This limits the freedom in which surgeons can practice. Also, only one surgeon can practice at a time. Furthermore, surgeons can quickly become bored with simulations.

Simulations are a good solution when surgical training needs to be as realistic as possible. Nevertheless, it is good to ask yourself whether this reality is really necessary. Sometimes it is not necessary to be realistic. If the game is intended for motor training, it is mainly about practising subtle movement. This does not have to be done on the operating table; it can also be done in a serious game. Serious games are video games used to teach skills or transfer knowledge. They are just as much fun as games for entertainment but are designed in such a way that they can be used for training purposes.

The serious game Underground is an example of an effective serious game for surgical training. The game is designed for surgeons to improve their motor skills. Training motor skills does not require the use of a simulation or cadaver. Still, surgeons need to put in about 200 practice hours a year. That amounts to about one hour per surgeon, per day. In addition to the fact that quite a few simulators are needed for every surgeon to practice, these surgeons must also be motivated to play the simulation every day. The University Medical Center Groningen previously used a simulator. Unfortunately, the UMCG noticed that the simulation was used very little. Surgeons did not like to play. Yet they saw that surgeons did like to play games on their smartphones during their breaks.

A serious game like Underground is a simplified version of reality, where the player enters an exciting game story and has to complete all kinds of levels. The immersive narrative, constant interaction with the game and short, challenging levels make a surgeon feel like they are not training but just playing a fun game. The result? Surgeons train more often and don’t experience the in-game exercises as workload.

Another advantage of a serious game is that it can be played on a smartphone. When a surgeon comes home from a busy workday and sits on the couch with a cup of tea, playing a serious game is just as entertaining as playing, say, Angry Birds. Both games are equally entertaining, but in serious games, the player is unconsciously training or learning. For healthcare institutions, this also solves a major problem: everyone can practice at the same time, whenever and wherever they want.

Serious game or simulation for surgical training: which one do you choose?

That all sounds laudatory! So don’t serious games have any drawbacks? Of course, they do. A serious game is not suitable for every situation. For a game like Underground, which trains motor skills, the reality is not so relevant. If you want to let surgeons experience what they have to do if sudden severe bleeding occurs because of an error during surgery, a simulation can be more interesting. Virtual reality in particular can be used to simulate real-life situations.

When the training does not have to be realistic, such as when training surgical skills or teaching theoretical material about surgery, a serious game is the best choice. Serious games are as much fun as games for entertainment and are enjoyed by people. Diving into an attractive game world, completing challenges, earning points and beating fellow surgeons on the leaderboard; while learning in the process. It’s possible with serious games, and it’s proven effective.

Want to learn more about serious games for surgical training? Wondering if you should have a serious game made or opt for a simulation? Please contact Tim Laning to discuss it!

How do you choose the right serious game studio?

The benefits of gamification for simulations

The benefits of e-learning for healthcare workers