He is funny, enthusiastic, a little pigheaded, incredibly serious, sometimes a little too busy and at other times completely immersed in thought. Yes, indeed, we are talking about the Grendel monster.

Everyone on the staff at Grendel games has a little bit of the Grendel monster inside him or her. The monster can spend days on end quietly sitting in its cave pondering over a difficult problem, to rush out of it, full speed ahead, ready to conquer the world at another moment. But where does this monster actually come from?

The monster was born at the source from which all creative things originate: inspiration, amazement and that excited feeling you get when you see, read or hear something special. This is also what happened to Tim, one of the founders of Grendel Games. He read Beowulf, a story based on an Old English, epic and heroic poem and in which an important role is played by a monster called Grendel. Grendel lives in the water and is described by the team as an anti-hero. When Tim, together with a few other enthusiastic game makers, was looking for the name of a games company, he immediately thought of the fearless monster Grendel.

Not only was the alliteration of Grendel with the word ‘games’ perfect; the founders could easily identify themselves with this monster. As pioneering entrepreneurs, they – just as the anti-hero Grendel – also had to swim against the current. And so the name Grendel Games was born. Of course, our Grendel monster is a lot less brutal and bloodthirsty than the one from Beowulf, but it does have the same resolute driving force as its source of inspiration. Anne Draaisma, currently the art director of Grendel Games, created the first Grendel Games logo. It looked like this: 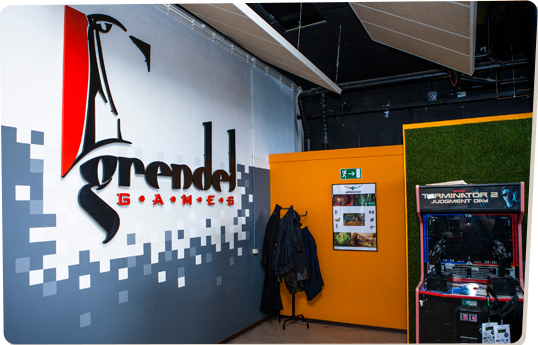 If you squint a little, you can recognize the face of a monster in this first logo. In 2016 Grendel Games decided to have a new house style and logo created. This task was once again given to Anne, who threw himself upon it with great enthusiasm. After a brainstorming session with his colleagues at Grendel Games – in a Grendel cave created especially for this purpose – Anne obtained enough input to design the logo.

There are also references to the monster throughout our workplace. You will find a strange manhole cover in the studio, for example, which evokes the idea of a network of tunnels leading from the caves of De Blokhuispoort to the murky waters of the canals, where the monster lives. Some of our colleagues have told us that, when working late in the abandoned studio, they have heard the peculiar noise of a manhole cover shifting. And sometimes there is an unexplainable puddle of water near the manhole cover when we arrive for work in the morning – and all the edible products in the refrigerator have strangely disappeared! But, of course you have to ask yourself if this was indeed the Grendel monster, or the monster in your colleague who was working late 😉

The monster and his arm

In a number of phases, Anne sketched the logo and the monster until the definitive logo had been designed. Tim, who had difficulty letting go of the old logo, reluctantly agreed to this revamping, on condition that the colour red would be used in the new logo. This is why the monster has a blood-red arm that is not connected to its body and that appears to lead a life of its own, and which you will also see recurring throughout this website.

Can you make it bigger?
This is the one!

Our awards
We use a few functional cookies for optimization; these do not collect personal data. Do you allow us to also place marketing cookies by Facebook, AdWords and LinkedIn, that personalize ads? Allow all cookiesNecessary cookie onlyRead more
Revoke cookie consent